Usually people come across various forms of loans in their lifetime, which the mostly commonly seen in the USA are fixed rate loan for automobiles or houses. There is usually a fixed payment each period and by the end of the loan, all payments including interests and principals will be paid in full. However, how is the monthly payment calculated?

If you got a quote from the lender, the quickest way is to use some online calculators for mortgages and pretty much everything is a plug and play. In order to derive the equation on your own, there are also a few approaches. And here I am going to cover some of them. Using a financial calculator, using time value of money and the hard core way, derive the monthly payment using the definition of loan.

It is pretty easy to use the financial calculator to calculate the monthly payment. I uploaded a Youtube video.

You can also quickly check with the calculator in Google to confirm the calculation was right.

In finance, people like to evaluate the intrinsic value of an asset to be the net present value of all future cashflows. In a 30 year fix rate mortgage with equal monthly payment, we can assume that the monthly payment has the value pmt. And for the payment at period N, the net present value of pmt should be discounted using the internal rate of return which should be period interest rate, monthly interest rate.

In this case the net present value of all future cashflows will be sum of all monthly payments. 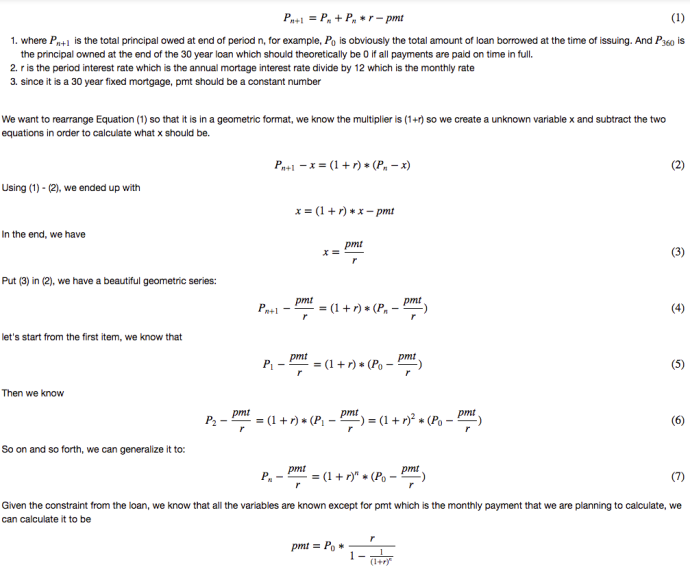 put the numbers into the equation, we got the right result. 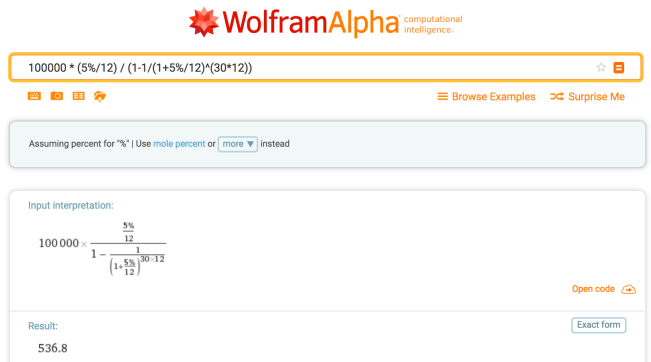 LIFO(Last In First Out) is a commonly used inventory recognition method, mostly in the United States. It will assume that the latest inventory will be sold first from the accounting perspective, not necessarily physically. Since the inventory cost usually varies, in that case, even for the same physical goods and same resale, different ways of recognition the cost might lead to different financial performance on the paper. LIFO is said to have positive impact on the cashflow when inventory’s cost are uptrending because recognizing expensive cost will reduce profit, hence, less tax.

This article will focus on a terminology which is called LIFO reserve. It is defined to be the difference between inventory amount recognized under two different methods LIFO and FIFO. By having LIFO reserve, inventory value and COGS under one method can be converted to another easily.

Now let’s see how to adjust some of the numbers when compare a company reported under LIFO to the ones that aren’t.

Under different methods, inventory bought is the same because it is fixed money paid for new inventory. The wiggle room is that inventory sold can be adjusted depends on which inventory you assume to be sold.

By subtracting Equation 4 from Equation 3, we have

In one of the CFA Level1 practice problems, there is a problem which well explained how everything fits together. 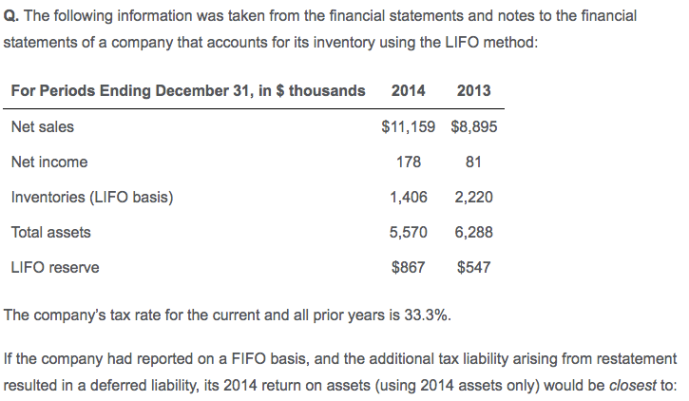 Under FIFO, we need to adjust (increase) not only the net income due to the decreasing profit but also increase the asset by adding up the LIFO reserve. Both the numerator and denominator will increase by to different level.

The return on asset pretty much doubled under FIFO.

When reading about the financial statements for any given company, or any spreadsheet in general, a situation any person constantly run into is numbers are presented in a slightly inconsistent way regarding the signs (+/-). For example, if there is an expense line item, people might assume it is an expense (outflow of cash) and will present the way as is. Sometimes, people will actually consider expense is different from income and will present it in a different way from revenue by including the numbers in a brackets like (400). Things can get really complex because there are metrics derived from a series of basic metrics like net income (bottom line on statement of operations) which should be the ultimate result after adding/subtracting the relevant gains and losses. I always have a hard time by calculating the final results because the signs for each line always confuse me. In the end, I ended up playing with signs for each line with my fingers crossed, wishing that I will be “lucky” enough to make the math work.

Above is part of the cashflow statement from unaudited 10-Q for Arrow Electronics, Inc., a public listed company. They did a great job because the bottomline for the cash used for operations are a simple arithmetic sum of all the number, given you treat numbers in parenthesis as negative, hence to subtract.

However, I want to use this data as an example to see how my script will be able to “auto detect” that the numbers in parenthesis should actually be subtracted. The Python script will take a brute force approach to find the right signs for each line item in order to reach to the right “bottom line”. The idea is very simple, it will switch signs for each line (positive, negative or exclusion) until it finds all the right sign and approximate to the bottomline within certain error tolerance.

Now let’s take a quick look at the implementation. 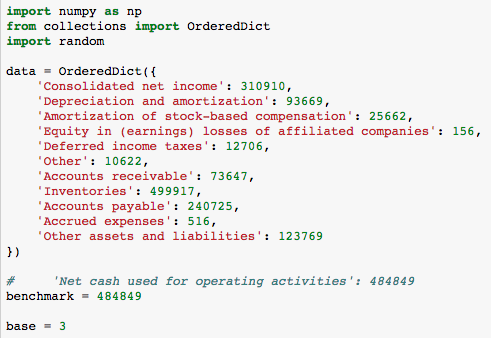 First, we load all the data points into a data structure, since we are not sure about the signs for each line, or even should we include one line item or notat all, we will treat them all the same as positive numbers to get started. Benchmark variable is the final answer that we need to match. Base variable is 3 because for each number, it can either be treated as a positive number, a negative number or not included (for example, there could be an intermediate variable. Including the intermediate variable along with all the basic variables will lead to double count).

baseN is a utility function that I borrowed from Stackoverflow, it can convert from a integer into a string format representation of any base. For example, baseN(4, 3) will be 11. We will use this function to help us loop through all the possibilities.

Then the next step is to try out all the possible combinations. Frankly speaking, I should have done way more research than I did but the first thought that came to my mind is to loop through all the possible combinations and represent the each state as a number of base 3. For example, in total, we have 11 elements. Then we have a number of 11 digits which each digital can have three states (negative, not included, positive). It can be represented as (0, 1, 2) for each state. In that case.

00,000,000,000 represents a possibility where all numbers should be treated as negative and clearly the total sum will not add up to our benchmark. Then next, 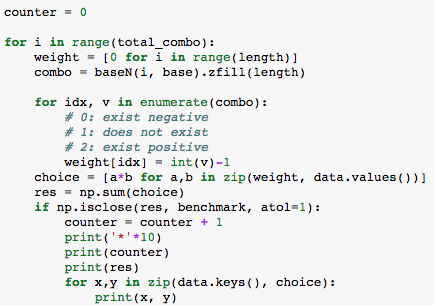 Weight is a variable that stores the sign for each variable. The code is pretty straightforward and I just want to clarify that the use of np.isclose is essential because all financial statements do some sort of rounding. It will be really hard to perfectly add up all the numbers and by tuning the error tolerance will be critical, something within 1% is probably a good rule of thumb.

In the end, the final outcome will look like this, as you can see, since I am comparing using the absolute value, the script gives me two answers where it successfully identified the lines items under “changes in assets and liabilities” should be treated as a opposite sign as the rest of the items.

There are several limitations to my implementation just out of the box. The first one will be the scalability. The complexity of this brute force approach will grow exponentially as the number of variables increases.

Here are some interesting ideas for further exploration. 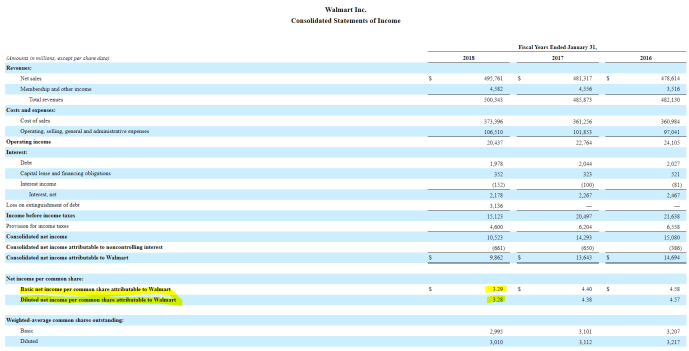 As you can see, they not only show the EPS, there is also another line right below it which is the diluted EPS. The reason that diluted EPS need to be disclosed to the public is that there are different kinds of equity like preferred stock, convertible stock that has the potential of “diluting” the EPS. How big a difference is can be? Usually it is pretty small, like for Walmart, the earnings per share is only 0.01 but in some cases, the difference can be material enough that investor want to know the potential downside.

Say for example, convertible stock sometimes got paid dividend and can also be converted to certain amount of shares. If not convert, that is the simple calculation for EPS, however, the diluted EPS to evaluate if all the convertible stocks got redeemed into common stock, on one hand, the net income will increase because the earnings that used to go to dividend now can be retained, on the other hand, the number of outstanding common shares also increased due to the conversion. In this case, there is a scenario where the diluted EPS if converted can actually be higher than the basic EPS, if this happens, the diluted EPS sort of loses its meaning of providing a good projection of the potential downside. Both IFRS and GAAP require that this kind of EPS – Antidilutive Security be excluded from the diluted EPS calculation.

Now, let’s do some simple calculation and see under what situation Antidilutive security could exist.

The constrain is that Basic EPS >= Diluted EPS

I like to rearrange it into the following format: