LRU_Cache stands for least recently used cache. I understand the value of any sort of cache is to save time by avoiding repetitive computing. Usually you store some computed value in a temporary place (cache) and look it up later rather than recompute everything. Functools is a built-in library within Python and there is a decorate lru_cache which is designed to help Python developers achieve similar goals.

So I have a dummy problem here, instead of the Fibonacci problem, it is even more exhaustive as the new item in the array need to be the sum of all its previous items plus 1. The level of complexity goes exponentially.

Clearly, by computing n = 24 is already taking more than 6 seconds. However, by decorating the function using the lru_cache, it is as quick as 4 millisecond. You can also find out the cache info, the sheer amount of hits is a the secret of why the function has been sped up so much. 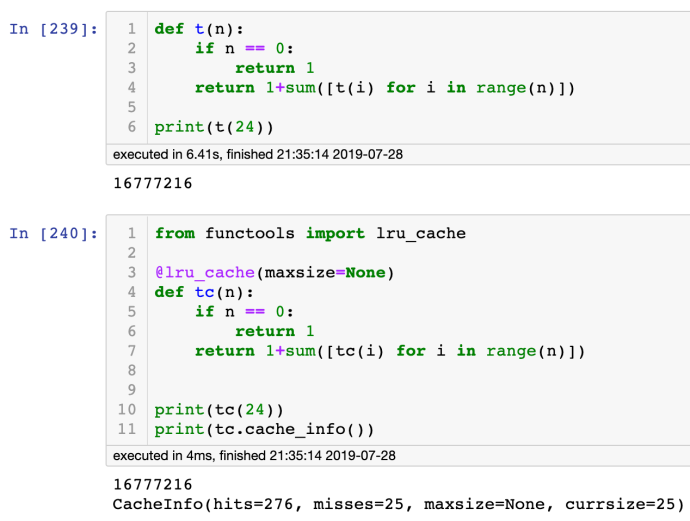 The performance acceleration is outstanding and based on the definition of Dynamic programming, this is almost a necessity so developers can focus all their efforts into decomposing the problem into subproblems rather than worrying about manually storing hashtable somewhere for loop up.

Attached is an example of by using the lru_cache decorator, how you can come up with a solution that outperform 100% of the Python solutions out there from leetcode execution time and space wise.

If you are interested in looking under the hood, it isn’t quite complex as all the utilities are written in Python rather than Cython, however, developers are only supposed to access the lru_cache through clear_cache or cache_info because it is believed that messing with cache through an threaded environment will cause unnecessary trouble. I tried to access some of the its private and internally attributes but failed to access the cache due to the fact that cache lives within the namespace of the wrapper and it is not accessible outside the function. This might be an interesting challenge to understand how to get it working.

Mr. James Powell has given this great talk at 2017 Pydata at Seattle about some of the advanced features and concepts in Python (using Python3 but most features also apply to Python2).

Here is a list of some of the highlights that Mr. Powell covered which I want to listed here for later reference:

In the end, I came across this glossary page from Python’s documentation website which doesn’t hurt to use as a checklist or challenge.

In HTML, there are many tags, especially the ones related to Javascript requires reference certain script, also somethings requires link to certain stylesheet by including a CSS file in the link tag. However, there are times which you can include all the necessary dependencies as static at the same environment where the site hosts, by including the relative path, or you can add in the complete path in a URL format that can be hosted anywhere on the internet (usually on a CDN Content Delivery Network).

There are several benefits to it:

There are also cases in which you don’t even have full control over the site that you are working on. For example, you could be developing certain subsection of an important website which you only have limited permission to edit certain section, uploading dependencies is not an option. Also, if you are writing a Chrome extension, you could be injecting certain script into the target sites to manipulate the page, however, it is not realistic for you to upload your dependencies to like github.com/mydependency.js.

Of course, CDN is way beyond just serving little script but can expand to any kind of content serving.

There are several sites like cdnjs.com which has plenty of Javascript modules or libraries. I came across this site called JSDelivr which looks like cdnjs.com but it has a few cool features like you can refer to any Github repos.

Of course, you can refer to any files on Github directly by using the link to the raw file hosted on Github. However, Github is just not meant to serve as a CDN and this solution sometime not as straightforward depending on the files types.

By using jsdelivr, you can simply prefix the Github path by some jsdelivr URL and you are good to have. I have managed to replace all my reference to certain Github material using jsdelivr and it works great.

As a non-native English speaker, I have came across plenty of practitioners who claim to be bilingual, trilingual or multilingual, most of them mastered the foreign languages either by growing up in a diverse environment or affording the privilege of attending some sort of school and receive certain training.

The Youtuber Moses totally redefined all of my impression of language study by posting videos about how he practice foreign languages by self teaching and constant communicating. He brought so much happiness to the people around them, strangers just met by recognizing their identity, respecting their culture, and most importantly, working hard (maybe not that hard as he must be smart 🙂 ) to literally speak their language to show respect. It is not that one guy that can speak so many language impressed me the most, it is his humble attitude and his deep desire to practice, to learn and to communicate with another individual on such an equal basis that makes wonder, if everyone in a world spend just a little time to work hard and think/speak from a totally different identity, how much better this world will become.

I am testing some front-end code and saw several youtube videos using VS code as the IDE. As a Python developer, it can be overwhelming at the first glance to see SO many lines of code just in general. However, it is like a magic to see how fluent front end developers leverage tools like VS Code and its extensions to pretty much auto generate the code they want with only a few key strokes. This is a post to show some the shortcuts that I came through today.

I do have to admit that VSCode’s default dark theme make it look simple and tidy. However, as you spend more time on it, you also realize that it has most of the features that you require out of a heavy duty IDE like Eclipse or PyCharm, at the same time, as extensible as sublime.

Like any IDE, VS Code comes with several shortcuts. Here is a printable cheatsheet which you can refer to on a constant basis, including quick comment, open, close and many others.

The most useful one for me is to use Cmd+K, Cmd+S open the shortcut cheatsheet within VSCode. (maybe there are so many key bindings that we have to get to what we need using two key strokes, many of the shortcuts within VS Code starts with Cmd+K)

Many of the tricks were straightly picked up from MS VS Code website, which includes basic features like auto complete, auto closing (as HTML has lots of <whatever> and </whatever> which is easy to miss).

Can you imagine that you only need 15 characters to generate 107 worth of HTML block? it not only thanks to Intellisense within VSCode, but most importantly, the Emmet Abbreviations which frontend developers like a lot.

In this case, each character is the short abbreviation for certain syntax:

You can refer to the Emmet’s website for more information

“Sharpening the axe will not interfere with the cutting of firewood.” Finding a good editor before you start spending lots of time coding is probably time well spent.