This is the part II of building a RESTful API using AWS Lambda and API Gateway. If you have not read the first post, check it out here. In this post, I will share how to get use the Lambda function that we have created in the previous section and create a publicly visible endpoint from there.

Amazon API Gateway is an AWS service for creating, publishing, maintaining, monitoring, and securing REST and WebSocket APIs at any scale

You can refer to the user guide of AWS API Gateway from here, very great content from the developers of AWS.

First of all,  first we need to create an API name. The default is very good but as you can see, it also support websocket when you need APIs for streaming near real time data – video, audio. And when you create API, you can also import from different sources.

After you create an API, the next step is to create resources and methods attached to it. The resource is pretty much the suffix of the API URL, in this case, we will use “exist” so that the user knows that we are check if the keyword exist or not. Then we can pick a http method. In this case, we will use HTTP POST which we require the user to submit the URL and KEYWORD in the request body of the post request. Theoretically, we don’t have to use POST and many other methods including GET should be sufficient.

Attached is a screenshot of if we are going to create a GET method under exist on top of an existing lambda function, it should be as easy as click the drop down of the Lambda Function and it will pick up one that we created in the previous post.

After we create the method. API Gateway will generate this diagram in which the processes got displayed to you in a visualized way. I assume that as we have more components integrated into the API Gateway, it will become more intuitive and helpful to the developers.

In the Client block, there is a lightning sign that you can click to test the end client. I edited the request body so it contains a sample user input, a json object that contains the URL and Keyword. After you click test, it immediately responded with the right response.

Frankly speaking, it looks easy when it works. However, it did took me a while to get this part ready because I was not sure which method to use and at the same time, should I use the query strings or the request body. During my exploration, the logging on the bottom right was super helpful and by putting more logic into your logging and error handling when you develop the Lambda handler, this integration should not take long.

My lambda function has been working pretty well. It took me a few rounds of modification to the original code, rezip the environment and reupdate using the AWS CLI for a few times.

The default is that you don’t need authorization. However, in a production environment, you will need authentication and authorization using tokens or other mechanisms to make sure your API is protected. Not only because you don’t want your service to be abused by unintentional users, but also restricted the limited audience so that your users won’t spike because of bots which will directly lead to a spike in cost too for you. 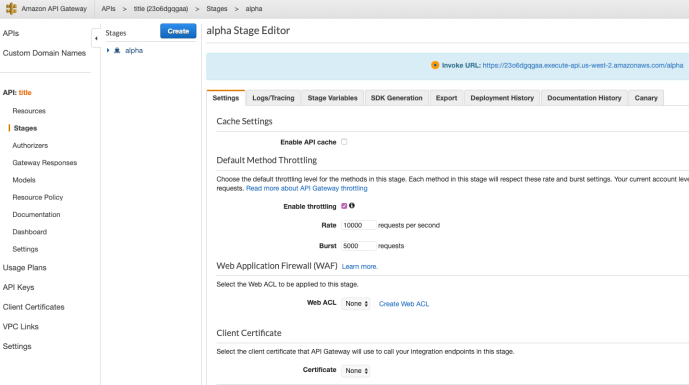 After you deploy it, I can make an API call from my local terminal using CURL.

Now you have a public API up and running!

However, to fully explore the capability of Lambda and API Gateway, I did a pressure test by making distributed API calls without caching.

I was using the library grequest as it claims to make distributed parallelism in a truly asynchronous way. In the end, the performance was not disappointing and the latency was never outstanding. To be honest, I am not sure I have done this part right, as theoretically, my personal blog should also be flooded with this test but somehow I did not see the usage at all. I was wondering maybe the lambda function did not get fully executed. Also grequests won’t display the response but only display the response status which is a bit mysterious.

(The following code took a paragraph of my blog post, split into words, then extend the list 10 times so it has a lot of total words. Then each element will trigger a request)

In the end, I logged into the dashboard and recognized that the usage spiked by thousands of requests which definitely came from this testing script.

Both of these applications’ pricing model is based on usage, usually a few pennies per million calls. So you probably should also take the pricing model into consideration to design you application. For example, if you have a large volume of traffic, how to avoid small API calls instead of batching them. Or consolidate APIs so one API is more computation-intensive, etc.

Don’t forget to delete your development environment on AWS to make sure you don’t get charged afterward.

It was a great experience for me to try out AWS Lambda and API Gateway, super straightforward to use and never have to worry about anything OS level or below. At the same time, great alternative to control the operating cost of IT project as your project virtually will cost nothing until the usage will catch up. Also, it forces you to focus your attention on the development, and also focusing on the “what” rather than the “how”. I know that AWS probably has an amazing SLA for all its services, also, by using services rather than doing it yourself, it also gives you more time/reason to unit test, battle test your own product rather than “don’t make a problem until it is a problem” because I know many teams are cautious about doing battle testing / chaos monkey on their own house of cards 🙂